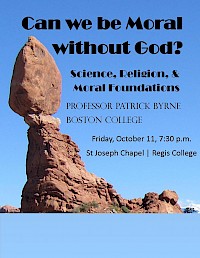 CAN WE BE MORAL WITHOUT GOD? PROFESSOR PATRICK BYRNE’S UPCOMING LONERGAN LECTURE

Drawing on insights from the work of Bernard Lonergan, Patrick Byrne, Professor of Philosophy at Boston College, reflects on some of the implicit assumptions that often shape discussions of morality from the standpoint of neuroscience. He explores the connection between morality, the question of God, and the way we think and choose.

Patrick Byrne’s research centers on ethics and the philosophy of science. Past chair of the Philosophy Department at Boston College, he has published widely in international journals. His books include Analysis and Science in Aristotle, an edited volume called The Dialogue Between Science and Religion (What We Have Learned From One Another), and a forthcoming monograph developing the ethical theory of Bernard Lonergan.

The Lonergan Lecture is an annual event sponsored by the Lonergan Research Institute at Regis College. The LRI, home of the Bernard Lonergan archives, was established to preserve, promote, develop and implement the work of Bernard Lonergan, SJ. Its projects include the Collected Works of Bernard Lonergan, lectures and seminars, and assistantships for graduate and post-graduate research. The LRI is a work of the Jesuits in Canada and operates in partnership with Regis College, the Jesuit School of Theology at the University of Toronto.

Everyone is invited to this free event. Reception following.