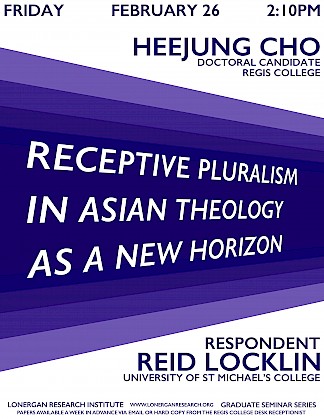 Regis doctoral candidate Heejung Adele Cho presents “Receptive Pluralism in Asian Theology as a New Horizon.” A response will be offered by Reid Locklin, University of St Michael’s College. Free and open to the public, reception to follow. Seminar papers available a week in advance from the Regis front desk or by emailing the LRI.

Receptive Pluralism in Asian Theology as a New Horizon

Asia and the Middle East are the birthplaces of the world’s major religions such as Judaism, Christianity, Islam, Hinduism, Buddhism, Confucianism, Taoism, as well as various primal religions. In the presence of many religions, people of different faiths have been forced to live side by side for thousands of years. Religious pluralism is the term given to this reality of people living with both ethnic, religious, and cultural differences. In their attempt to understand these differences, the Asian bishops have entered into interreligious dialogue and have adopted a stance of receptive pluralism. According to them, receptive pluralism is a pluralism of different expressions of reception of revelation that occurs due to the pluralistic nature of the human context in which divine revelation is received and understood. Receptive pluralism does not lead to relativism because harmony of expression within pluralism is possible. Additional expressions are beneficial for a fuller understanding of reality.